The rear main seal on an engine eventually starts to leak, leaving oil spots wherever you park.
Gradually the leak gets worse and those drops become puddles.

Messy, embarrassing and a hassle having to add oil all the time, but the repair requires taking half
the car apart, so you just live with it.

What if instead of a drain hole on the plate between the engine and tranz, there was a way to pump
the oil back into the engine?

I thought of a small pan with an electric pump first, but then realized I could use engine vacuum to
suck the oil up. All it took was a jar and a few pieces of rubber hose. The proof of concept device
was plastic - it worked, but the vacuum collapsed it when it got hot, so I replaced it with a glass jar.

I used it for about 6 months. It eliminated the puddle, but the messy hassle of emptying the jar into
the engine got old fast, so I came up with an automatic drain version. 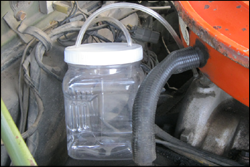 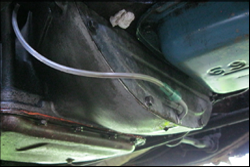 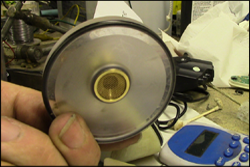 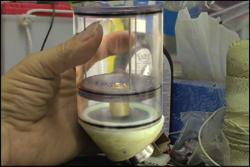 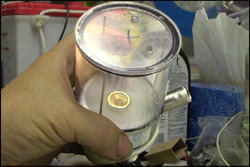 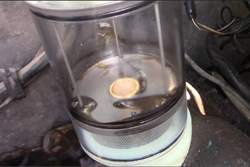 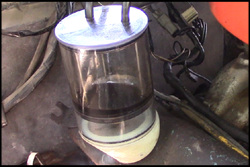 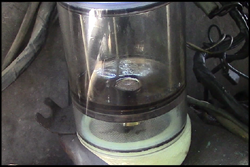 It works well, but needs a vacuum shut off float valve for when it fills up. A year after I installed
it the leak got so bad that the RMSLR woud fill up in less than 10 minutes so the oil would get sucked
into the intake, making a huge cloud.

Fortunately, I found a way to change the rear main seal without taking the engine or transmission out.
But, because the engine bearings are worn, it still leaks, so I left the RMSLR on. The engine has
175,000 (or maybe 275,000!) miles on it, so it's likely something will break soon. I'm hoping it will
hold out till I have the money to convert the car to electric.